RockJem.com / Index / What it's all about / Defining Jem

What ingredients are important to Jem fans about Jem? What should companies creating new interpretations consider?

If it's the Jem brand you are interested in, you need to understand what makes it Jem. The original people behind the success of a brand of course know this, and the fewer of them involved in a new interpretation, the more it comes down to what we longtime fans like. So continue reading if you're curious.

Jem fans are not hard to please. While it's the original Jem we became fans of, updates and changes are inevitable, and most of us realize this and are very positive about new interpretations.

Here are some things to consider about Jem. And what preferrably not to do. 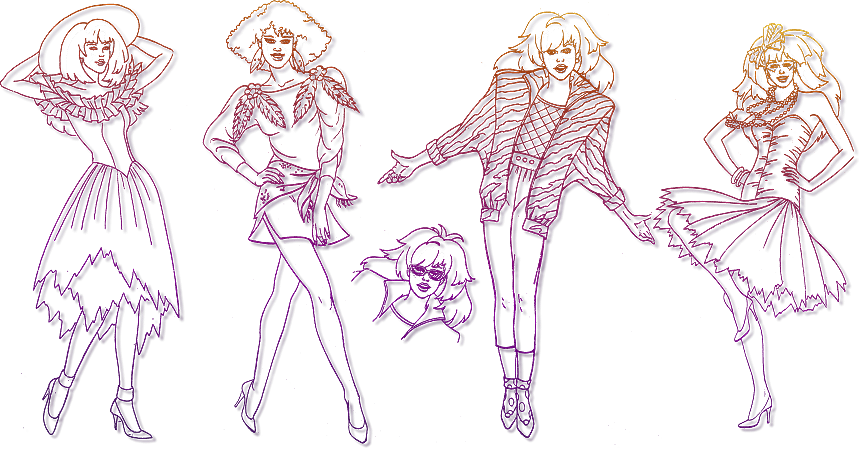 Any longtime Jem fan can probably describe the brand by keywords. Like music, dolls, cartoon, female role models, band, colorful hairstyles, fashions, positive messages... and that's a good start. Still it's hard to put the heart of Jem into words, but here are some of the most obvious characteristics. And the reasoning behind it, aswell as suggestions about how things can be changed and updated.

Here are some things that are not Jem.

This is generally about not changing too much, not dumbing it down or turning it to something too far away from what it was. Some examples:

- All fans of Jem are not fans of similar doll bands, cartoon bands or real life girlbands. Certainly don't make Jem resemble the Spice Girls, Josie and the Pussycats, Barbie and the Rockers, The Archies, or any other animated or real life group. It would not be very appreciated by those brands anyway. Rather try to understand what differs Jem from these.

- Don't ruin Jem's hair! She doesn't need to suddenly have short hair or shaved off hair on the sides. And don't water down Jem's trademark pink hair to blonde. Jerrica is already blonde. And there are enough other female lead characters in the Jem brand with blonde hair.

- Don't overlook the importance of the music, because it's carries the whole thing, the reason for them being bands. Music is the theme! Don't dumb down the music style or lyrics.

- Don't keep Jem and the others always in one and the same recognizable outfit. They're not Smurfs, nor She-ra or Rainbow Brite, they should wear different outfits depending on what they're doing.

- Don't put some self-proclaimed Jem expert in charge of the whole thing. Nor as your source of information. Some fans are extremely niched in certain areas of Jem, and have their own personal ideas and sources for their ideas, which might not work for all fans, but will rather be controversial for other fans. Preferably accept contributions of original material, like art, from several sources of fans. Or even a team of Jem fans from several completely different sources.

- Don't remove the band thing and make Jem and the Holograms simply a singing and dancing group.

- Don't remove or ruin Synergy and her holograms! That technology is still futuristic today, and is not very common in stories as a main ingredient. Don't change Synergy's looks too much or make her a magic fairy or something.

- Don't ditch the Misfits! They add tension between the bands, and are very liked characters on their own.

- Don't make the Jem characters into something completely different like: crime fighters, princesses, superheroes, wizards or vampires. Well those things aren't bad, but it could turn out really silly for the Jem characters.

- If a new cartoon is created, don't re-invent the animation-style so it comes out looking too unique, too weird and or stiff. Like was done for all the re-inventions of Ducktales, Thundercats, and She-Ra.

- Don't create only new characters, overlooking all from the cartoon and doll line. Especially if you need a dancer, why not use Danse?

- Don't overlook all the original people behind Jem! Include as many as you logically can.

- Don't use bad grounds for how the characters look. Don't just look at one screen capture of the cartoon, which is perhaps off-model. Nor refer only to a source like the 80's dolls packaging art, which had a look of it's own but doesn't resemble what most of us recognize as Jem.

- Don't make all characters into copies of each other, with just different colors of hair and makeup.

- Don't make the characters too different in body size, if they're going to be able to sell as dolls and exchange clothes with each other.

- Jem isn't all about getting to a concert in time, and beating the Misfits, there are more stories to be told. So don't just watch the first five episodes and write a hundred stories just like that.

Take a closer look at the people that created the original Jem.

Characters for descriptions of all characters.

Read all about took place in the episodes, in the Episode Guide.

See all the beautiful cartoon fashions.